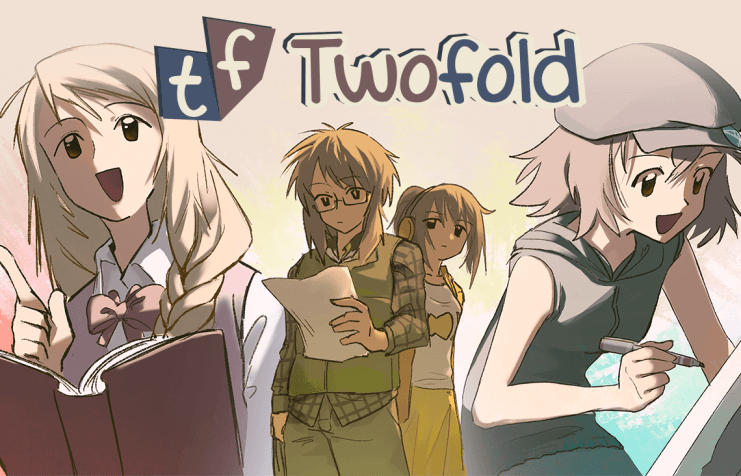 Olive’s situation is dire. They’re on the verge of being thrown out of college unless they can salvage their GPA, and their only chance rests on classes they know next to nothing about.

Their lifeline: two club leaders who are more than willing to help them succeed. However, no solution is that easy. Olive soon finds themself in the middle of a conflict between these two friends that threatens to undo their long-standing love for each other.

Twofold is a story about love, family, and connection. It celebrates family of all kinds, and explores the strength (and fragility) of bonds between people.

Taking place roughly a year after First Snow, Olive’s position as an outsider to these established friend circles will be vital to fully understanding the situation threatening to undo this close-knit group.

Pessimistic and guarded, Olive lacks much in the way of friends, relying only on their sense of self-reliance to push them through life until now. While college life never came naturally to Olive, confronting their possible dropout is a trial all on its own.

The leader of the art club. Dissatisfied with the club that already existed on campus, Caprice decided to commandeer a room and some loners and form her own. She carries this attitude through most aspects of her life, traveling her own path. Ever bright, optimistic and full of energy, she’s always seeking joy around her, without much regard for norms and expectations. She strives to bring this same joy to the friends she’s pulled into her orbit, even if they’re a little resistant. She tends to be loud, which often gets every eye in the room on her, whether she means it to or not.

Although Caprice has a childlike enthusiasm to her, she’s not naive and innocent. She recognizes there’s a time for maturity–for when motivational shouting isn’t the solution. She has her own worries, though she mostly keeps them to herself.

While the writing club has a long and proud history in her college, Millie’s succession to the post of club leader coincided with the leaving of many of its members, leaving her sense of pride wounded and the club itself dangling by a thread. It’s only Millie’s nature, as stubborn as she is studious, which has kept the flame alive.

Millie’s sense of curiosity about the world is expressed in extreme opposites, from dragging others along with her love of writing and reading, to her endless fascination with the mechanical world, often leaning into the hood of cars being fixed by her mechanic father. Her sense of maturity and independence is something she prides herself on, though those close know that even she needs a helping hand at times. Despite having few friends, those she keeps are very dear to her.

Stranded at the center of a widening gap, Hayley has become tasked with balancing herself between her two best friends. For the most part, she tries to deal with this troubling instability in her usual way: cool and collected as she’s able. Lacking the energy and wild ambition that her friends seem to have, Hayley tends to stick to herself and do things at a measured pace. She’s easy to get along with, so people tend to like her, but she avoids social situations if she can. This has left her with mostly distant acquaintances, and she’s quietly very grateful for Caprice and Millie continuously pulling her along with them.

Hayley often expresses herself through jokes with a delivery so dry one might not catch that they’re being teased. Her other, more personal mode of expression is via music, but she’s very selective about who she shares it with.

Want to know more? Check out the dedicated Twofold website by the developers!

Get avatars and wallpapers for Twofold here!